The Times I Got Mugged, Part 2


I spent fourteen years of my childhood living in Bogotá, Colombia. And during this time, there were several instances of attempted mugging, only one of which was successful - the first.

I think that this first attempt was the only successful one because it was the only one in which the muggers just took what they wanted without any sort of request accompanied by threats of violence. They just took it. There's a lesson to be learned here for would-be muggers - asking for the cash will get you nowhere. You need to just take it and run. I do not endorse this lifestyle, by the way.

But I get ahead of myself. Later, once-and-if I've shared all of my mugging stories with you, you can let me know if you have a better explanation for why the first one succeeded where the rest failed.

The second attempt to take what was mine happened about a block or two from the location of the first. You'd think I'd want to stay away from these places, but they were also a block or two from where I lived, and a guy needs to walk home every now and then.

So it was dark outside, and I was on my way home, from the mall or youth group or both, along the sidewalk of a busy avenue with a tree lined median. I was by myself, and it was a bit cold out, so my pace was brisk. Not brisk enough, I guess, because I soon became aware that another pedestrian was slowly catching up to me. I picked up the pace a little, but so did he, and he was soon speed-walking right next to me. I bet we looked hilarious to anyone who could see us. He was carrying a folder or a purse or a man-bag in front of him. I may have been shouldering a back-pack. Have I ever mentioned how spotty my memory is?

"Do you have any money?" or "What have you got in that back-pack?" he may have asked.

It's not important what his question was, because my answer, whatever it was, did not please him at all. Or maybe we had a short exchange and that didn't please him, because at some point his words were along the lines of, "Do you know what I have in this folder/purse/man-bag? A knife! You don't want me cut you, do you?" I do remember the threat of being cut.

I sped up slightly, not so that he would think I was trying to out-speed-walk him, but in a manner that would demonstrate how nervous I was. Then, suddenly, I stopped, ran a few yards back, and then, seeing a hole in oncoming traffic, darted across the street and onto the median.

You may think that my judgment is as spotty as my memory. You are probably right.

I turned and saw he had not been able to find an additional hole through which to pursue me. I yelled at him, and here's the part I'm ashamed to type, but, in the interests of getting as much as I remember out there: "¡Colombiano estúpido!"

I stayed on the median and jogged in the direction of home, after noticing him turn around and begin walking back the way he had come. And that was that.

When I got home, my family and future brother-in-law were waiting for me. Maybe it was taco night. I told them the story. They were horrified and then laughed at my awkward rebuke of a would-be mugger.

Carlos, if you read this, do you remember any additional details?

Posted by Unknown at 3:29 AM No comments: 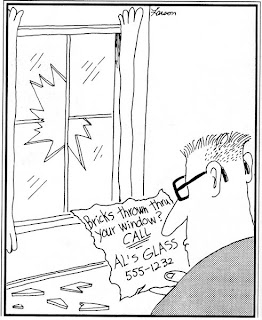 This good news is a mixed bag, wouldn't you say? It's mixed with bad news, like the doctor who says, "I've got good news! You have cancer! And we can cure it!" Sure, the fact that the doctor is confident that you can be cured is good news, but the cancer itself is not part of that good news. That's the bad news!

"Hey, we can treat your cancer!"

So, is Keller's bad news true?

Am I more sinful and flawed in myself than I ever dare to believe? And if so, is there a way I can tell this to be true, or do I just have to take Keller's word for it?

Now, I agree that I have flaws I'm unaware of. I am often blind to my shortcomings until people point them out to me.

But I recognize this. Keller is claiming that I am more flawed and sinful than I dare to believe. Does he have any evidence for this? And he's going to need some pretty strong evidence if he just wants to assess all of humanity in one sweeping blanket statement!

I don't buy it. I can't think of a reason to accept his statement as true about me. I'm not perfect, and I definitely have blind spots. But what sins have I committed and what personal flaws do I have that I don't dare believe? Point them out to me, please!

I suspect this is another example of a kid who believes himself to be stupid because he's been told his whole life that he's stupid, and not because he is actually stupid.

I've been told my whole life that I'm a wicked sinner. That I am more flawed than I dare to believe. And if I were still a gullible child, I might believe it, just because someone told me so. But I am not a gullible child any more. I refuse to be wicked just because you tell me I am.

And if you want me to believe that I'm wicked, you need to provide me with evidence of my wickedness. Because unless you do, you are disguising news that is false as true, and news that is irrelevant as Gospel.
Posted by Unknown at 11:13 AM No comments:

To me, QualiaSoup is like the Pixar of YouTube — he hasn't made a video yet that I haven't appreciated.

My question to you is: How do you tell if a given action you perform with the expectation of some sort of "answer" is a superstition or not?

Posted by Unknown at 2:58 AM No comments: