This is taken from Steve Shives, without his permission; hopefully he won't mind. 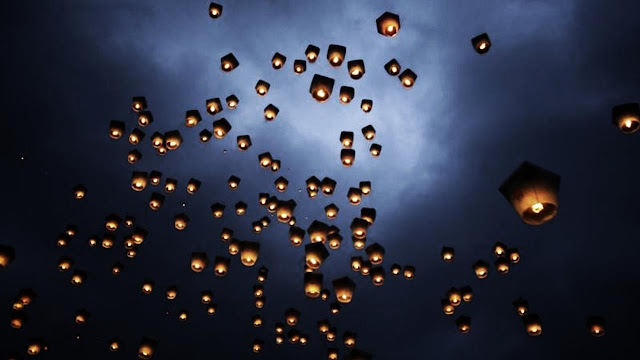 A little over a week ago, as my wife and I were on our way home from Hagerstown, I looked up and saw a group of strange lights in the night sky. There was a period of maybe thirty seconds where I had no idea what they were. They weren't stars, or aircraft, or anything immediately familiar. They just burned bright and hung there in mid-air, as if by magic, or perhaps some technology far advanced of humanity.
As we began to drive past them, I realized what they were: sky lanterns — candles inside inflated paper bags. The heat from the candle's flame heats the air inside the lantern, causing it to rise like a hot air balloon. The lantern flies as long as the candle burns, then falls back to the ground once the flame goes out. No magic, no alien technology. Something humans in China knew how to make hundreds, perhaps thousands of years ago, a simple combination of science and craftsmanship.
My purpose in sharing this with you is to demonstrate (hopefully) the beauty of a true explanation for something, even when that explanation might appear mundane to some when compared to more fantastic theories. Mysteries should intrigue us because we want to know things, not because we cherish our own ignorance. To cling to a supernatural or extraterrestrial explanation of something without evidence undermines the very thing that got us interested in that something to start with: we wanted to know. And wanting to know is pointless unless we're willing to accept the answer we find, whatever it might be.
I find nothing beautiful about reports of UFO sightings or alien abductions or magical and supernatural happenings. There's no reason to believe that any of these things is real. They stand between us and the truth. They're the clouds obscuring the stars. (Metaphorically speaking, you know — clouds are actually very interesting.)
Those sky lanterns, though . . . they were beautiful, especially once I knew what I was looking at.

My favorite parts of this:‎
"...wanting to know is pointless unless we're willing to accept the answer we find, whatever it might be."
and
"...they were beautiful, especially once I knew what I was looking at."